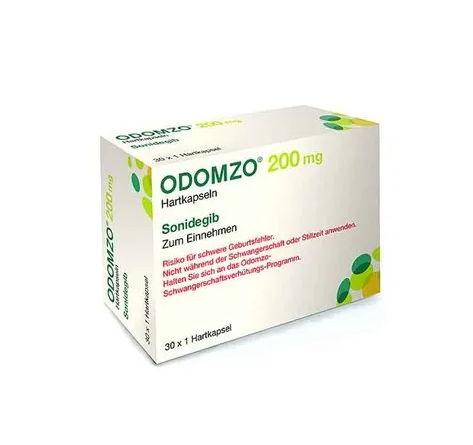 Magicine Pharma is registered with the Government Of NCT, India, Ministry Of Health in Government of Delhi, India, registration number DL-RAJ-122372 and as a wholesale distributor, department file No. 44208.

Check Availability in your country

Sonidegib 200 mg is a prescription medication used to treat adults with advanced basal cell carcinoma, a type of skin cancer. It works by targeting an enzyme called an agonist, which stimulates the growth of tissues in the affected area. Sonidegib 200 mg belongs to a class of medications known as Hedgehog pathway inhibitors and is usually taken once daily for 8 weeks or until the tumor becomes smaller in size.

Common side effects associated with sonidegib include nausea, fatigue, swelling of the legs or arms, and muscle pain. Patients may also experience changes in hair texture or color while taking this medication; however, these effects are typically temporary. To ensure safety and effectiveness, it's important that patients follow their doctor's instructions closely when taking sonidegib 200 mg.

Sonidegib 200 mg is a hedgehog pathway inhibitor used to treat patients with locally advanced, recurrent, and metastatic basal cell carcinoma in adults. Its primary effect lies in blocking activity from the Smoothened protein, an important component of the hedgehog cellular signaling pathway involved in maintaining homeostasis within cells. This causes these cells to die off or stop growing, helping to reduce tumor size and prevent it from spreading further. Sonidegib does not, however, affect other types of normal cells, making it a less aggressive treatment than many other anti-cancer therapies available today.

Sonidegib 200 mg is an oral medication used to treat people with basal cell carcinoma. It works by inhibiting the activity of the abnormal gene responsible for the uncontrolled growth of cancerous cells. While this drug can be beneficial for some, it is important to note that it does have the potential to interact negatively with other drugs. Some of these interactions may be serious, so patients need to be aware and make sure their doctor knows about any other medications they are taking.

This could include herbal supplements, vitamins, and over-the-counter medicines as well as prescription medications. When taken with certain HIV treatments or anti-seizure medicines, there may be increased side effects such as dizziness or drowsiness; conversely, when taken with blood thinners or steroids, the effects of sonidegib may not work as intended and the dosage would need to be adjusted accordingly.

Side effects of sonidegib 200 mg

One of the most common side effects of Sonidegib is gastrointestinal issues. Because many of the metabolized forms of the drug are released through the patient’s digestive system, they may experience nausea, vomiting, and diarrhea. Patients may also notice a decrease in their appetite and weight while they’re on the medication, so doctors may prescribe additional dietary supplements to ensure they’re getting the nutrients they need.

Some forms of serious symptoms

While gastrointestinal issues are the most commonly reported side effects of Sonidegib, some patients may experience other, more serious symptoms. For instance, some people have reported shortness of breath, chest pain, and dizziness. Additionally, individuals taking this drug may experience an increased risk of infection due to its immunosuppressive properties, leaving them more susceptible to viruses and bacteria.

Being careful while taking certain other drugs

Patients should also take special precautions when drinking and using recreational drugs while on Sonidegib. Since the drug has been known to increase the effects of alcohol and other substances, it can put people at a higher risk of intoxication and dangerous behaviors. As such, it’s important for users to exercise caution when consuming such substances.

Other forms of side effects

Finally, it’s also important to note that Sonidegib can cause dryness in the skin and eyes and a decrease in calcium levels in the blood. To minimize these effects, doctors may suggest that patients take additional supplements or medications to keep their skin and eyes moist and their blood levels in check.

When taking any type of medication, it is important to follow your healthcare provider's instructions to ensure the best possible outcome. With sonidegib, this means taking one 200 mg tablet every day with or without food. Generally, it is recommended that people take sonidegib at the same time every day, preferably in the morning. It should also be noted that it can take several weeks before it is possible to start feeling the effects of sonidegib, so it is important to continue taking the medication regularly in spite of any persistent symptoms.

Sonidegib (marketed as odomozo) is an oral medication used in the treatment of patients with multiple non-cancerous nodules that are associated with multiple cutaneous leiomyomas (non-cancerous tumors). It is prescribed in 200 mg doses once daily, taken with food. Although it is effective in treating these conditions, sonidegib has certain side effects and risks which should be taken into consideration when taking the medication.

Less common but serious side effects

When taking sonidegib, it is important to be aware of both the common and rare side effects associated with the drug. Common side effects include diarrhea, dry mouth, rash, itching, constipation, heightened sensitivity to sunlight, fatigue, abdominal pain, and nausea. If experiencing any of these symptoms, it is important to speak to a doctor or healthcare professional right away to determine the best course of action. Less common, but serious side effects of sonidegib include: musculoskeletal pain, increased cholesterol, increased risk of gallstones, muscle and joint stiffness, confusion, and suicidal thoughts. If experiencing any of these side effects, one should seek medical attention immediately.

Drug interaction with other forms of drugs

Cholesterol levels, liver enzymes, and liver quantities should be monitored regularly during the course of taking sonidegib, as it can elevate cholesterol levels and increase the risk of developing certain types of cancers. Therefore, it is important for individuals taking the medication to work in consultation with a doctor to monitor their condition and health. Additionally, concurrent medications, particularly certain antibiotics and antifungal drugs, may interact with sonidegib, so it is important to inform the healthcare provider of all medications being taken before beginning a course of sonidegib.

Pregnant women should be careful while taking these medicine

For pregnant women, it is not known if sonidegib is safe to take and caution should be taken, as it has been linked to birth defects and fetal death. Therefore, it is not recommended that pregnant women take sonidegib. Additionally, there is not enough evidence to determine if the drug is excreted in breast milk, and it is advised that lactating women stop taking the medication before breastfeeding.

Protect yourself from the sun's direct rays

It is important for those taking sonidegib to protect themselves from exposure to sunlight as the drug can increase sensitivity to the sun’s UV rays, leading to severe sunburn. Individuals taking the drug should limit exposure to direct sunlight, wear sunscreen and hats or other protective clothing, and seek shade when outdoors.

some studies have suggested that sonidegib may have some level of cytotoxic effects in vitro, but there is still no solid evidence to show that this is the case. Therefore, more research needs to be done before we can definitively know whether or not sonidegib is indeed cytotoxic.

2. What is Odomzo used for?

Odomzo is a prescription medication that is used to treat adults with basal cell carcinoma - a rare skin cancer. Odomzo is applied topically, directly to the site of the tumor, and is typically used after surgery or radiation treatments have failed

3. How does Sonidegib work?

Sonidegib is a medication that works by inhibiting the action of a specific protein, known as smoothened (SMO). By blocking the action of SMO with sonidegib, abnormal cell growth can be stopped.

5. Can odomozo be taken with meals?

6. What if I forgot to take the odmozo dose?

Then skip the missed one . It is advisable this way so as to not take two doses at the same time

7. What if I can't tolerate the side effects after taking odmozo?

Then discuss it with the doctor immediately so as to avoid facing further complications or side effects associated with this medicine.